She taught writing at University of Wisconsin-Madison Continuing Studies for many years as a Distinguished Faculty Associate. She directed nationally recognized programs including the “Write-by-the-Lake Writer’s Workshop & Retreat” and “Writers’ Institute.” She was a coach in the UW’s Pathway to Publication Coaching Program, and enjoyed watching writers become authors.

She is a member of Mystery Writers of America, Sisters in Crime, Wisconsin Writers Association, Writers Guild of America, East, and Blackbird Writers (mystery writers). She is a past Golden Heart winner and finalist (three times) in the contests sponsored by Romance Writers of America. Her romantic suspense novel, Spirit Lake, won RWA’s Golden Pen Contest. She currently writes mysteries in the Fudge Shop Mystery Series and Mischief in Moonstone novella series.

With writing partners Peggy Williams and Bob Shill, Christine earned first place in a Slamdance Film Festival writing contest with a true-story script about Donaldina Cameron and optioned it to New Line Cinema once upon a time. She has optioned other projects as well and continues to write scripts and coach screenwriters and critique their material.

Christine was raised on a farm in southern Wisconsin where she learned the value and joy of hard work in the out-of-doors. She graduated valedictorian in a high school class of 29 students. She went on to get her two academic degrees in journalism from UW-Madison. 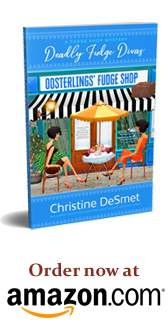